Drink tea, read, explore, and learn a little along the way

Where To Find Me

Despite my reservations about Gaiman’s style, the Graveyard book gave me the nudge I needed to venture into more of his darkly enchanting world. There was one title I heard repeatedly while contemplating his next work? American Gods. It seemed a good place to go next. Did it disappoint? Well, I wouldn’t say that it disappointed, but I wasn’t floored into submission either.

I’m sure most have either read this book by now or watched the hit T.V. show. For the sake of consistency (and those who, like me, tend to wait until popular fiction is nearly forgotten to pick it up for themselves) lets back up a bit.

American Gods, follows Shadow who, while serving his time in jail, discovers that his wife, Laura, died in an accident. While on the plane going home he meets a grizzled old man who calls himself Wednesday and is offered a job playing chauffeur and bodyguard. Shadow, a man with nothing to lose, accepts.

masking some complex questions all centered around the mauled, ever-changing spirit of what we call today, America. In that way, at least, I can say Gaiman came close to capturing that spirit. Not only with the invention of new gods like those of fast food, television, and freeways, but of the eternal ever-beating heart of the earth where we walk. The very earth the Natives of this land gave thanks to every day they traversed it.

What did I like about it? Gaiman paints a picture of gods being prisoners to our every wish and whim. Locked not only into the laws that we believed for them but dependent on our continued belief. The idea itself has been around for a bit now, but to me, this was gone about in a very human way. After all, if it was our intense belief that created Gods, then we created them in our image. We gave them our anger. Our love. Our jealousy. Our passion. Neil does a great job showing us the humanity of these forgotten gods. They are con men, prostitutes, morticians, homeless drunks. They are afraid and stubborn and blind and wise – filled with faults and pettiness and fierce loyalty.

There wasn’t a moment with the Gods that I didn’t enjoy. It was fun trying to guess their identity even if I wasn’t as familiar with the lore where they originated. Bast and Ibis were brilliantly done but I found Odin to be… not what I would have expected him to be. I enjoyed the part of him portrayed in the epilogue better.

What bothered me? I can think of one thing that tended to be a continuous itch.

What the hell was Shadow’s job?

He didn’t drive all that much and he sure as hell failed at being a bodyguard. When it was brought up, all that was ever said was that he was special, or that he was important, but I couldn’t find a particular reason why it had to be him and not anyone else. In the end, it’s a timid flame held up to the blaze of a bigger picture, but I would have liked to know more.

Other then that it’s the usual nitpicks I tend to have with Neil’s style of writing. it’s a little slow and distant.

All around I would recommend the book to anyone looking for an adventure that mimics a dream. You’ll remember it even if it doesn’t become a favorite.

The first book by Neil Gaiman that I tried and failed to read, was Neverwhere. For some unfathomable reason, it would not hold my attention. As much as I wanted to like and enjoy his work – after all, I adored The Nightmare Before Christmas and the one Sandman comic I owned – it was a hopeless endeavor.

I put the book down.

It gathered some dust.

I got rid of it at some point in time.

That being said, I went into his work again with no small amount of skepticism. You might be wondering, whatever drew you to this book now? The simple answer? It has pictures in it. I’ve always been a sucker for an illustrated book. Make those illustrations a little dark and strange to go with a book that’s just the same, and it’s a baited hook I can’t refuse.

Let’s get into the meat of the review, shall we?

The Graveyard Book is the story of Nobody Owens, Bod for short. Nobody lives in a graveyard, raised by ghosts, guarded by his not quite alive, not quite dead guardian, and is being hunted by the man Jack who murdered his family. It follows Nobody Owens as he grows up among his strange family, learning about Goblin gates, fading from notice, dream walking and more. 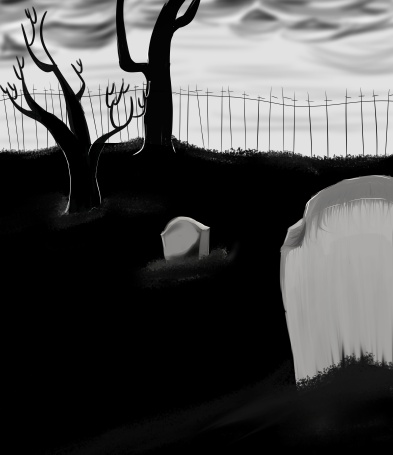 the living rather than a wild boy learning to be human – the actual writing itself reminded me much more of Peter Pan. Even though the book opens with murder and does, eventually, build up to that moment of completion, it never strays from the child heart it’s centered around. For most of the book you follow Bod who’s growing up the same as all of us. He makes friends, and grows out of them. He’s told not to do something, and he does it only to learn from it. He has a shallow understanding of what happens to his parents but the danger is real to him in that distant, innocent way it usually is to kids that comes from a lack of proper understanding of what it means to die.

Overall I found the book enjoyable. It was exactly the kind of darkly innocent, relaxing read I was looking for. If I were going to nit-pick it for anything it would be that sometimes the plot can be a bit choppy and there was a point in the book when Owens seemed to mature very quickly. I had to go back and make sure I didn’t accidentally skip a chapter. I wish Neil had delved deeper into some of the elements – like the origin of our nefarious Jack, the enigmatic Pale Lady, and the Danse Macabre. At the same time, those little mysteries suit me just fine. They always made stories feel more real to me.

I’d recommend this book to anyone who wants an easy, engaging, and darkly delightful read. I’d say it’s best for rainy days in bed but, come on, read it on a beach. Be that ghost on the sandy sea of trashy romance novels.

“There was a hand in the darkness, and it held a knife.”

By writers, for writers. for over 30 years in Western Massachusetts

Musings of a night owl librarian . . .